Out and about in London’s East End, (An East London Walking Tour).

This week, I have been putting together an East London Walking Tour. The walk took me out and about in Wapping, Limehouse, Shadwell, Whitechapel and Spitalfields. This is an area of villages based in that collectively make up part of London’s East End. At the time of writing, I am in England which is in Lockdown and I have chosen to take my daily exercise around Wapping, Limehouse and Shadwell, exploring London’s historic East End in the process and to see what’s open and how it has changed since my last visit. It’s an area that I have passed through, driven by, worked in and chilled out in over the past 40 years (yikes! Doesn’t time pass?).

I began my East London Walking Tour at Tower Hill Underground Station and on my way stumbled across historical links to the reformation of the monasteries, London’s trade in “exotic” wares including those like ivory that have fallen from favour. I enjoyed coffee and Baclava and what limited hospitality was allowed at The Melusine (https://www.themelusine.co.uk) before heading past a memorial to The Colossus of Roads and then into Wapping.The route took me onto part of the Thames Path, (https://www.nationaltrail.co.uk/en_GB/trails/thames-path/). 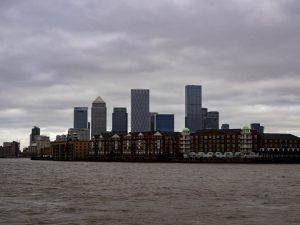 Canary Wharf from the Thames

These days, I find it hard to imagine that London is made up of a series of interconnected villages, each with their own local history and raison d’être. Wapping was a dock, an area to unload and load ships. When it got to the stage that ships could wait in the Thames for up to 4 weeks to be unloaded. In order to relieve pressure on the river, a series of inland waterways developed. Small inland harbours were dug out to provide sanctuary for ocean going trading vessels of all shapes and sizes.

That waiting time in the Thames, left ships vulnerable to theft and damage. To counter this England’s first police force was commissioned. The Thames Police was founded in 1798 and precedes the founding of the Metropolitan Police in which it was later subsumed. These days it has moved away from its role in countering piracy and is more likely to be seen dealing with accidents on the river or counter-terrorism roles. Its base is in Wapping High Street and the Thames Police’s base is midway down nestled in between some of the finest public houses in London, each of them oozing history, maintaining their character and all with a tale to tell. One day, I’ll make it to each of them in one night, (Something that’s hitherto eluded me  as I never can choose which one I like best and always stay in the first one I visit). The Prospect of Whitby, (https://www.greeneking-pubs.co.uk/pubs/greater-london/prospect-of-whitby/); The Town of Ramsgate (http://townoframsgate.pub) and the Captain Kidd 9https://www.facebook.com/The-Captain-Kidd-Pub-569315609850386/) are firm favourites.Now, the Turks Head, there’s a place. Purchased by the local community and these days a thriving little kitchen & Cafe with a lovely garden ideal for people watching or just a bit of piece and quiet. (https://www.theturkshead.co.uk)

From Wapping around one of the docks looking for two historic churches with links to seafarers, Thomas Jefferson, Captain Cook and a local philanthropist.

I could have ended the walk in Whitechapel but that was just the halfway point. London Hospital, the former stomping ground of the Elephant Man, Florence Nightingale and pioneering medical research. This led me through into Whitechapel passing two significant crime scenes, bypassing the birthplace of two members of London’s criminal underworld and into the fast changing scene around Spitalfields.

If you’d like to join me on an East London Walking Tour or would like to ask me about putting together a themed walk in your area please don’t hesitate to contact me.